Why is Invisalign so Popular for Adults? 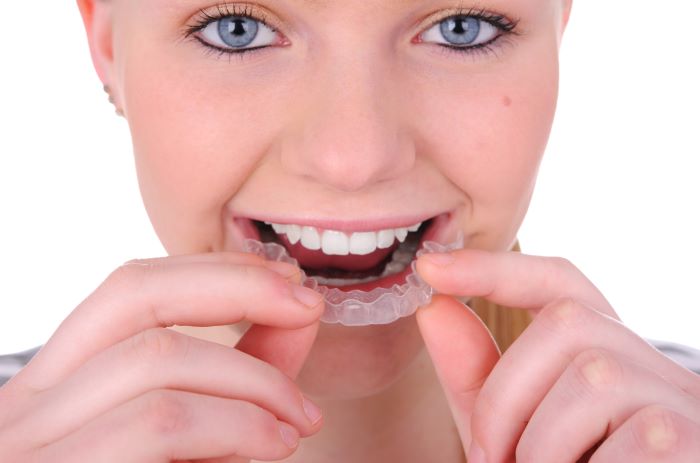 Many adults used to shy away from orthodontic treatment, recoiling at the idea of having to wear the sort of bulky metal braces that were prevalent in their younger days. Then, along with the Millennium, came Invisalign, a state-of-the-art teeth-straightening system that has taken the world of dentistry by storm. This revolutionary orthodontic treatment has proven to be a hugely popular choice for adults wanting to achieve the smile of their dreams.

Invisalign holds many key advantages over conventional braces, including:

Appearance and confidence. In a 2016 survey of 2,000 adults in the U.S., nearly 80 per cent said teeth-straightening treatment had significantly boosted their self-confidence. Traditional braces are conspicuous and draw attention to the orthodontic problem, but Invisalign appliances are so discreet that they’re practically invisible – as the name suggests.

Convenience. Unlike conventional fixed braces, Invisalign devices can be removed for eating, sports and special occasions. They can also be taken out for brushing and flossing, which eliminates the oral hygiene problems associated with the brackets and wires of metal braces.

Comfort. Invisalign aligners have smooth edges, which cause less irritation to the cheeks and gums. In fact, the whole Invisalign process is focused on patient comfort, including 3D computer imaging that avoids old-fashioned, messy impressions.

Unique hi-tech system of customization. Invisalign appliances are uniquely tailored to each patient’s mouth and orthodontic requirements, with the help of cutting-edge digital imaging. This high level of customization means Invisalign can be used to solve a wide range of problems, including bite issues that can lead to serious jaw disorders. The technology behind the Invisalign digital scanning system also allows your orthodontist to show you how your teeth will look when treatment is completed.

The Huge Rise in Adults Getting Orthodontic Treatment

Invisalign reached a significant milestone in 2017, when it was announced that the number of Invisalign patients had topped five million – many of them adults. It’s estimated that 25 per cent of Invisalign patients in the U.S. are adults. These may include your friends or work colleagues. But you probably won’t realize they’re undergoing this hi-tech orthodontic treatment, because that’s the whole point of Invisalign clear aligners – they’re virtually unnoticeable!

According to the American Association of Orthodontics (AAO), the number of people aged 18 and over having their teeth straightened more than doubled from 1994 to 2010 – from 680,000 to over one million a year. This huge increase may largely be attributed to the launch of Invisalign in 1999.

How Does Invisalign Work?

Invisalign aligners are made from medical-grade polyurethane resin (clear plastic) that reposition teeth vertically and horizontally, and can even rotate them, in a series of precise movements. Not all teeth are moved at the same time, which provides far greater control than conventional braces.

Each aligner in the series is worn 22 hours a day for about two weeks. Each progressive alignment gradually moves your teeth closer to your ultimate goal – giving you back your winning smile, which is usually achieved within 12 months. The process delivers the right amount of pressure in the right place at the right time, with precisely timed and regulated movements of the teeth.

Each Invisalign aligner is unique to the patient – and their teeth. This makes it ideal for both simple and complex orthodontics. Invisalign features a proprietary SmartTrack system for more predictable and controlled realignment of teeth, with results that are easy to see at every stage of the process. Invisalign treatment costs around the same as conventional braces and is covered by many orthodontic insurance plans.

Besides comfort and convenience, Invisalign is also a healthier option than traditional braces, allowing you to brush and floss your teeth as normal, which reduces the risk of tooth decay and gum infections like gingivitis. Traditional braces make it difficult to remove bits of food that become trapped in the brackets and wires. This can result in a build-up of bacterial plaque and eventually cavities and gum inflammation. The American Dental Association (ADA) says these oral health issues can lead to heart disease, diabetes, stroke and pneumonia.

The ADA also points out how straightening your teeth can significantly improve your oral health. Teeth that are excessively spaced or crowded can cause gum disease. When teeth are positioned correctly, it enables the gums to fit better around the teeth, strengthening resistance to potential periodontal problems. The risk of periodontitis (gum disease) increases as we get older, which is another reason why so many adults are turning to Invisalign to correct teeth and bite issues. Another health benefit of Invisalign is that you can maintain a nutritional diet, whereas, with braces, it can be difficult to eat certain foods.

You’re Never Too Old for a Stunning Smile!

If you decide to go ahead with Invisalign, your orthodontist will be able to guide you through the whole process and produce a personalized treatment plan that will restore your healthy smile and self-esteem.

DentalROI provides relevant dental content to help providers educate patients. The statements, services, and products referenced in this article have not been evaluated by the Food and Drug Administration, and they are not intended as a substitute for professional medical advice, diagnosis, or treatment. Always seek the advice of your dental provider with any questions or issues you may have. Specific recommendations may vary in different circumstances, so individual consultation is important.